The earliest known mention of archaeological remains in the area is an Acheulian hand axe, perhaps dating 200,000 – 100,000 BC found east of Lancing College Chapel.

The track alongside Lancing Ring may be of Neolithic origin – circa 4,000 – 2,000 BC – a branch of the ridgeway from Beachy Head to Cissbury/Chanctonbury Ring and westward through Hampshire to Salisbury Plain.

Link to History of Shoreham (Neolithic)

When a Romano Celtic Temple was discovered in 1828 north of Lancing Ring the site was found to comprise a small late Iron Age shrine (c.700 BC – AD 43). Similar finds in Southern England have been inside late Iron Age forts.
From artefacts and coins found on the Roman Celtic site the temple was probably in use during the first half of the Roman occupation. It comprised a 40 foot square pavement with a room 16 foot square in the centre, with walls of flint, plastered and painted red. Around the site were several graves.

The Romans left in the early 400’s and Aelle, a Saxon chieftain, landed in AD. 477 with three sons Cymen, Wlencing and Cissa. After slaying many Britons it is suggested Wlencing established himself on the site of what is now North Lancing with another group to the east of Hoe Court where a 6th century Saxon cemetery was excavated in 1928. Saxon salt pans mentioned in the Domesday Book have been excavated in the old marshlands of what is now New Monks Farm.
Saxons on the Shoreham History site (Link)

The Normans were responsible for the original Parish church (St James The Less), built in 1120 in the centre of the settlement.

The Lloyd family acquired the Manor of Hoe Court in 1736 and then progressively acquired the manor of Lancing until they owned about 80% of the parish. They finished the building of the Lancing Manor House in 1800 ( it was demolished in 1972 to be replaced by a Sports Centre).

The origins of the Ring could be that the Lloyd family having consolidated their holdings in Lancing and having moved from Hoe Court to Lancing Manor, set about ‘gentrifying’ their land in the late 18th century. They perhaps planted the original beech trees along the track from Hoe court and on Lancing Ring – maybe in imitation of what had been done at Chanctonbury.

The dewpond was perhaps constructed at the same period, again possibly in imitation of the one at Chanctonbury but also to provide a source of water to enable cattle to be grazed on the Downs before piped water was available. There are a further two pond sites in the area, one at Bartons farm and one northeast of MacIntyre’s field recognisable as deep depressions in the ground.

The ponds were probably holed in the 1930’s so they would not hold water when piped water was readily available and concern about the spread of T.B. in cattle was increasing.

There had long been a windmill at the eastern end of the chalkpit at the top of Mill Road. The first reference to a mill at Lancing – but not necessarily at this site – was in the Domesday Book. The most recent mill was a post mill with four sails and a tail post. It was last used in 1898 and demolished in 1905 but traces of the brick base can still be seen in the grass.

Prior to World War II, the downs from Lancing to Sompting were unfenced wide open spaces but during the war the Agricultural Board ploughed every bit of land could get their hands on for corn and the downland has remained under cultivation ever since apart from the Public Open Space south of the Ring. (During the war this area was used by the Canadian Army. In 1949 the Trustees of Lancing College sold this area to then Worthing Rural District Council to be a permanent Public Open Space for the people of Lancing.

In 1985 a fresh study of the A27 trunk road at Worthing and Lancing was started with the recommendation published in 1988 that the road should go up through Hoe Court, along Barton Farm valley and then through a 33 metre deep cutting south of Lancing Ring effectively destroying the area forever. As a result of much pressure from the Friends of Lancing Ring and other groups the Department of Transport accepted that the road should go through tunnels under the Ring rather than through a cutting. [ Editors note: the scheme has since been dropped, and there was no mention of it in the new road plans of 2003.]

The bypass would of cut through this valley 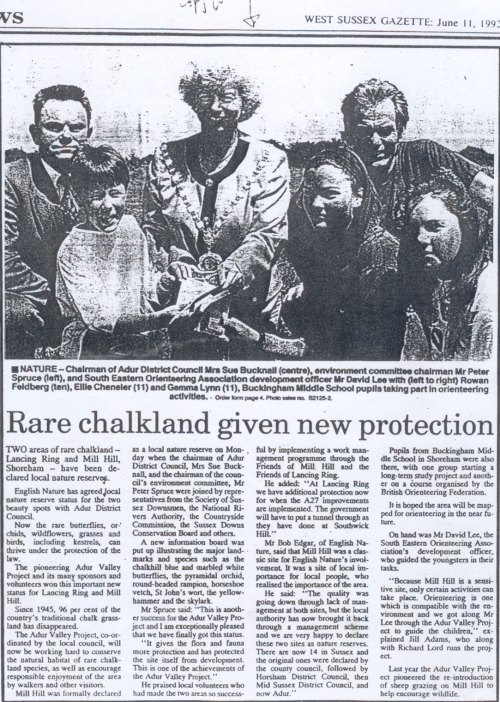 One response to “History”